Spoiler alert: I did not win. Did not even place. But, wow, what an experience. And the things I’ve learned about homemade ice cream along the way… Well, that’s why I’m writing this post.

As the days here in Central Texas have crept ever-upward into double digits, I’ve contentedly puttered around in the kitchen, conjuring up delicious (and sometimes even healthful) desserts on my homemade ice cream machine.

What started out as Honey Vanilla and Salted Butter Caramel soon progressed to Pear Vanilla Sorbet, Buttermilk Basil (Weight Watchers) Sherbet, Blackberry Sorbet, Sweet Cream, Chocolate and Vanilla. I’m not kidding — I seriously made ALL of these since mid-June when I purchased a dedicated ice cream maker at Costco. (No wonder my Weight Watchers effort has stalled in recent weeks!)

Along the way, I’ve developed a bit of confidence, maybe even swagger. So when I learned that the (first ever, but extremely promising) Independence Day Spectacular festival put on by our local newspaper would be holding a homemade ice cream contest, I was intrigued.

But, what could I make? I wanted it to be original. Even though my own ice cream tastes lean toward vanilla, I thought it would be hard to stand out from a crowd of vanillas. Then, I thought about Independence Day. Should it be red, white and blue? Vanilla, blueberry and strawberry? Hmm…

For all my tinkering, I’ve actually never developed an original recipe before. I’d never made batch after batch of variations for side-by-side testing, tweaking ingredients or amounts until I’ve gotten it just right. I didn’t actually get the opportunity to do it this time, either, but I came close and I was pretty happy with what I came up with.

For additional inspiration, I scoured the internet for flavors, and contests, and contest-winning flavors. Contest-winners varied, of course, based upon the venue. Food 52, one of my favorite (but kind of snobby) sites, held a contest in which the winner was Olive Oil-Saffron Ice Cream with Burnt Orange Caramel Swirl. And the runner-up? Kabocha Vanilla Chai Ice Cream. (I’m not sure what Kabocha is, but I’ll be sure to look it up.)

Meanwhile, closer to home, the 57th annual Hopkins County Dairy Festival’s Ice Cream Freeze-Off (which calls itself the Texas State Championship) crowned a Pecan Pie flavor as champion this year, with the people’s choice award going to something called Vanilla Pebbles. (Hopkins County became home to a Carnation Milk processing plant in 1937, which led to a big increase in the importance of dairy farming thereabouts.)

At last, I decided to adopt a theme for my recipe that didn’t exactly call Independence Day to mind, but one that paid tribute to the season — one that used locally-available seasonally-appropriate ingredients. I hoped that playing to tradition in this way — bringing to mind days gone by when you couldn’t GET these ingredients at any time but summer — would overcome the novelty and “weirdness” of my recipe choice: Summer Sweet Corn and Buttermilk Blackberry Ice Cream.

Alas, my strategy didn’t work. Maybe the judges were traditionalists (a strawberry/banana combo won, I believe), or maybe it was just that I failed to spread the blackberry evenly enough through the batch (I had to make a full gallon, which ended up requiring 4 containers). But the eventual ice cream was delicious and super summery, and there was plenty left to bring home! (I guess the judges couldn’t stomach a gallon of each of the competitors’ wares.)

I’ll share the recipe below, but first a few words about my decision-making. I tried various ways of infusing the corn flavor into the ice cream. The recipe that inspired my variation used a corn cob, along with the kernels, which cooked with the milky liquids to infuse it with flavor. I didn’t have cob corn, so I tried just corn kernels, but I blended them up with an immersion blender to amp up the flavor. The problem? The result was lumpy-ish with corn solids, which I mistakenly believed was due to my substitution of cottage cheese for cream cheese.

Later, I tried just using corn kernels without blending them, but the result just wasn’t “corny” enough. I started with a version in the style of Jeni’s Splendid Ice Cream of Ohio, which uses cornstarch as a thickener rather than egg yolks and employs cream cheese for smoothness. Then I wanted to try egg yolks, but the result — though delicious — was a bit too heavy tasting for summer. I ended up splitting the difference and using egg yolks, cornstarch AND cream cheese. I wanted the depth of flavor without the heaviness.

Not knowing that the corn solids had caused the lumpiness in my initial batch, I immersion-blended the corn kernels into the milk mixture on my contest-entry giant gallon batch. But then, when it came time to strain the corn pieces out of the mixture, it was pretty much impossible to get all the milk a strainer while keeping the corny bits behind. So I went full throttle and put my fancy blender into service, blending everything super super fine and incorporating the corn into the batter completely. The result was plenty smooth and very very corny — which went deliciously with the blackberries, though there were far too few of the blackberries in the end.

In concocting my final effort, I referred to lots of different sources, but especially Ice Cream Science, which offers a handy dandy spreadsheet for calculating various ice cream blends. Because science!

The site taught me a few key things, the most important of which is: the enemy of homemade ice cream is iciness. To avoid iciness, freeze your ice cream as quickly as possible as cold as possible, and keep it consistently cold. To this end, put everything you’re using in the churning process (spoons, churning paddles, storage containers, etc.) into the freezer so that it doesn’t hinder the freezing process. Additionally, keep air away — by using Ziploc bags in an ice bath, and, after churning, seal off the top of the ice cream from the elements with parchment paper or plastic wrap.

And now, without further ado, the recipe: 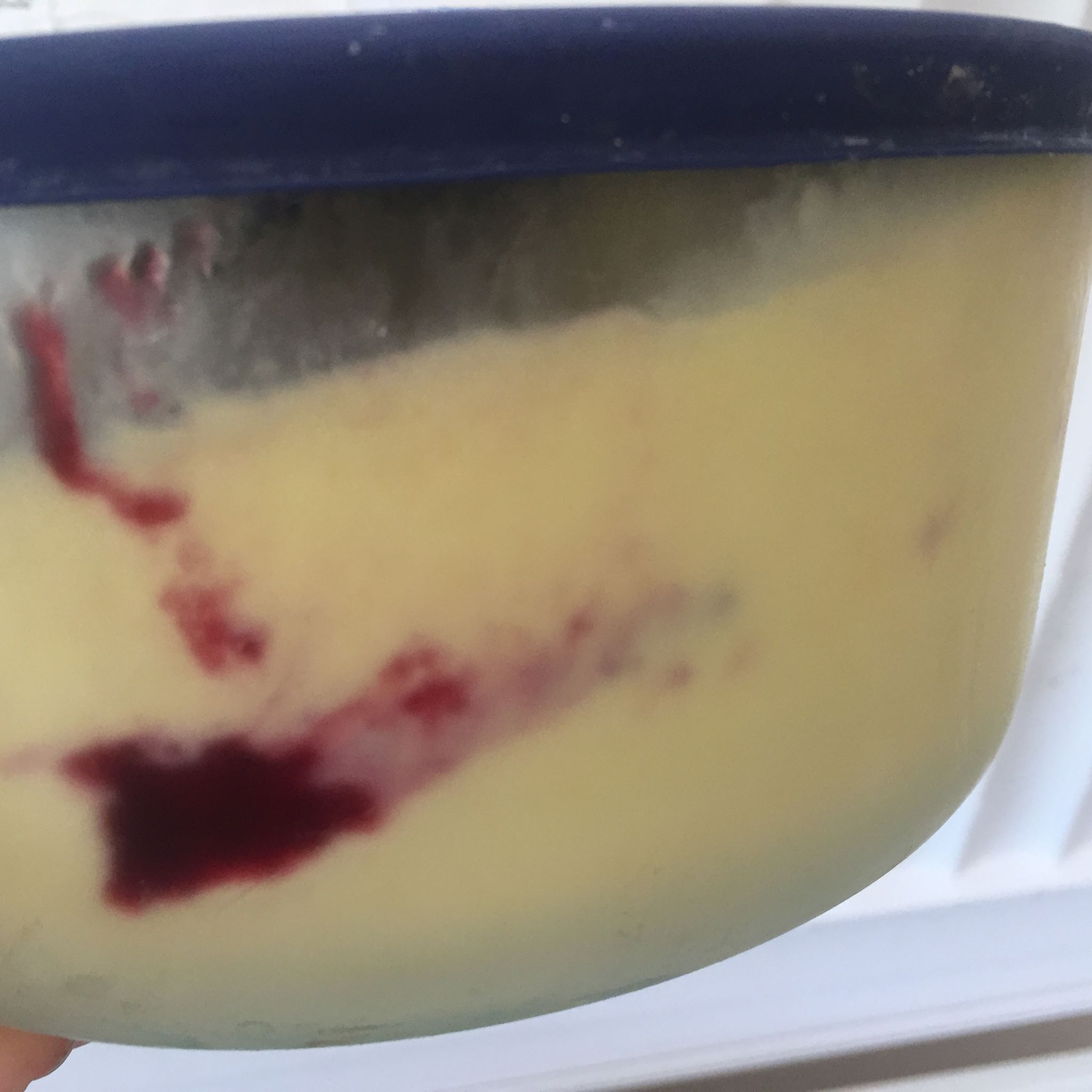 Adapted from a recipe in Saveur Magazine

For the Ice Cream:

For the Ice Cream:

This site uses Akismet to reduce spam. Learn how your comment data is processed.